Laparoscopy is a surgical procedure in which the surgeon accesses the stomach from inside using a small & lighted instrument known as the laparoscope. The laparoscope is inserted through small incisions made near the abdomen area. The size of the incision is around 5-15 millimeters. Being a minimally invasive surgery it has several advantages over open surgeries.  It is a philosophy that believes that cure is possible through least trauma and this, in fact, is a patient’s right.

What are the benefits of laparoscopy?

Reduced hospital stay: Laparoscopy is generally an outpatient procedure and in most of the cases, patients can leave on the same day.

Shorter recovery time: The recovery time after laparoscopy is significantly lesser as compared to open surgery.

Better cosmetic healing: Since the cuts are small (5-10 mm) so they heal faster.

Lesser pain: The pain during and post surgery is lesser than open surgery

The whole procedure generally takes around 30-60 minutes but time may vary according to the case. You will be administered anesthesia, so you won’t feel much pain during the procedure. Following is the procedure: 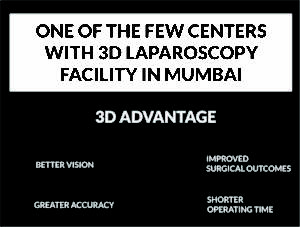 Why is laparoscopy carried out?

Laparoscopy maybe carried out for diagnostic or treatment purposes. Following are the conditions which can either be diagnosed or treated by laparoscopy:

Fibroids, also known as uterine myomas, are compact and firm tumors that are made of smooth muscle cells and fibrous connective tissue which develop in the uterus. Myomectomy is the procedure by which fibroids are treated. It involves the surgical removal of fibroids.

In this disease the tissue (called as Endometrium) which normally lines the inside of the womb or uterus and which is normally shed off with blood during periods, grows outside the uterus and is seen involving ovaries, intestines, urinary bladder, the lining of your pelvis and may even spread to distant sites like lungs etc.

Ectopic pregnancy is an abnormal case of pregnancy in which the fertilized egg does not grow in the uterus’ lining but instead it grows in the fallopian tubes, horns of the uterus, cervix or the ovaries

Laparoscopic procedures can help overcome infertility. Being infertile is defined as being unable to conceive despite having regular sex without birth control for one year.

Hysteroscopy is a procedure in which the patient’s womb (uterus) is removed surgically Depending on the condition affecting the patient, the doctor may remove the patient’s ovaries and fallopian tube as well.

An ovarian cyst is a closed sac like structure which contains fluids. They develop on the ovaries of a woman. Most types of ovarian cysts can be removed using laparoscopy.

Cervical Cancer: When the source of cancer are the cells present in the cervix – the lower most part of the uterus which connects to the vagina, the cancer is known as cervical cancer. In its early stages, cervical cancer is generally treated with surgery